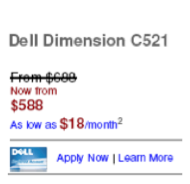 Attorney Daniel Hattis and co-counsel Lieff Cabraser Heimann and Bernstein reached a settlement with Dell, Inc. in a Class Action charging that Dell falsely advertised price discounts of computers on its website.

In October 2011, the Court approved a settlement that provided a $50 payment to each class member that submitted a timely and valid claim.

In addition, in response to the lawsuit, Dell changed its methodology for consumer online advertising, eliminating the use of “slash-through” references prices.

The complaint charged that Dell advertised “limited time” specific-dollar discounts from expressly referenced former prices, but that the discounts are false because the reference prices are inflated beyond Dell’s true regular prices. The certified class consists of consumers in the State of California who on or after November 1, 2005, purchased via Dell’s Home & Home Office website any Dell-branded products advertised with a supposed former sales price, typically appearing as a price with a “Slash-Thru” alongside the actual selling price.

Further details about the settlement can be found at http://www.discountsettlement.com/.